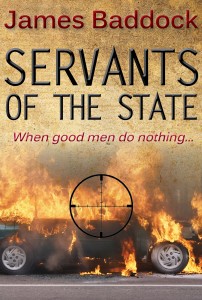 Servants Of The State was originally called Tamerlane, the codename of a top MI6 ‘mole’ inside the Kremlin; the reason for this title was that Tamerlane, or Timur The Great, was a Mongol emperor in Central Asia during the late 14th and early 15th centuries, and one of the greatest conquerors in history – the story takes place in Central Asia, starting in Sary Shagan in Kazakhstan, moving on to Tashkent (Uzbekistan), Dushanbe (Tadzhikistan) and on to the border with Afghanistan. However the basic idea for the book came from a rough outline of a projected book called The Perun Mission, which used a lot of the research I had carried out on ASAT (anti-satellite) warfare for The Alaska Project. A fair part of this would have taken place in Sary Shagan, which was then the main centre for Soviet missile research (and still is a major centre for developing Russian missiles, despite the fact that it is now in Kazakhstan). Perun (named after the leading god in Slavic mythology, and specifically the god of thunder and lightning) had a storyline concerning the defection of a British scientist to the Soviets in order to work on their ASAT programme and the attempts made to bring him back.

Gradually, however, the defection plot was abandoned and the book evolved into smuggling Tamerlane out, all the way from Sary Shagan to the Afghanistan border (750 miles as the crow flies, considerably further by road and/or rail), with the Russian FSB (successors to the KGB) hot on the fugitives’ heels. The British agent was named Cairns – simply that, no first name given, just Cairns, in order to maintain a level of mystery about him; more than that, it’s likely that Cairns is not his real name anyway. The reader finds out one or two details about his background and history, but the fact remains that Cairns is very good at not being noticed; he is a courier, not a James Bond style secret agent, and his job is to smuggle information across frontiers, which means being anonymous is his stock in trade.

It is the pursuers who are more interesting – and this is intentional, because it is on one of these, Verenyev, that the story pivots. He is a Police Investigator from Moscow, on secondment to Sary Shagan to assist Colonel Krasnin of the FSB in tracking down a CIA agent in Sary Shagan; Krasnin needs his undoubted expertise. Verenyev has little time for the FSB and, having succeeded in identifying the agent, is looking forward to returning to his wife and family in Moscow when he is dragged into another investigation when Cairns snatches Tamerlane from under the FSB’s noses in Sary Shagan and goes on the run with her (Irina Malenkova, a member of the staff of the Russian Defence Minister). Verenyev’s job is now to find her before she reaches the West – she is in possession of vital information (the nature of which Krasnin keeps from Verenyev).

In some ways, it’s a similar situation to Behrens and Kreissner in The Dutch Caper, but the difference is that, although the two men detest each other, Krasnin is far too intelligent to waste Verenyev’s abilities; he lets the policeman lead the pursuit, to good effect. In short, despite their mutual dislike, Krasnin and Verenyev form an effective team, which is not good news for Cairns and Irina. However, Krasnin has his own agenda as regards wanting to catch Irina, and it is as Verenyev comes to realise what these are that he has to make his own decision about the situation.

Thus, Cairns is not the central character at all; it is Verenyev, who is not an action hero, simply a very good police officer who just wants to be left alone to fight crime, but who is only too aware of the power of the mafiyas and of the corruption amongst his fellow policemen. He is not a crusader, but, like it or not, he finds himself in a position where his actions are going to have a profound impact on Russia’s future – and he can’t duck the issue, not this time… It is the duel between Cairns and Verenyev that forms the main focus of the book, in the roles of fugitive and pursuer.

Servants Of The State eventually replaced Tamerlane as the book’s title – as with Carronade (Berlin Endgame), Tamerlane would have led readers to expect a historical novel. Servants refers to the four main characters (Cairns, Irina, Verenyev and Krasnin), each one, technically, a servant of the state, but who all, in their own ways, question the obligations implied by that label.