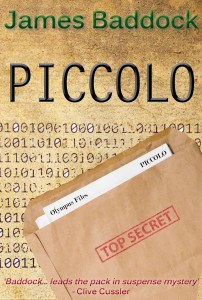 Piccolo took a long time to get going, really, in terms of writing. I’d had the idea for it after reading about a string of deaths of Ministry of Defence computer experts and the thought came to me: what if they weren’t accidents or suicide? For various reasons, it took a while for the storyline to take shape; the original main character (an ex-Falklands veteran called Curren) was ditched in favour of Special Branch Detective Inspector Redmond, which also meant a less ‘macho’ portrayal, and the bad guys in the early drafts (the KGB) were also shown the door as being too predictable – which meant that the sequences I’d roughed out for them also had to go. Even when I’d come up with the ‘real’ bad guys, I decided to keep their sequences down to a minimum – too much was being given away in terms of plot suspense.

I realised that most of the book had to be presented from the viewpoint of the two main characters, Redmond and his assistant, Gail Harper, in order to keep the central mystery (what is Piccolo?) unresolved for as long as possible. Also, changing from the Falklands veteran character meant that I could portray Redmond as a far less ‘heroic’ character, at least to begin with; in the opening chapters, his main concern is to turn in a whitewash report on the deaths in order to safeguard his own career. Gail is the more determined to find out the truth; she pushes Redmond into continuing the investigation when he’d much rather sign it off. Of course, it’s another variation on the ‘odd couple’ – they take a while even to be civil to each other, but, gradually, they become an effective team. This, in turn, raised the question of how far this thawing in their relationship should go – would there be the clichéd sex scene towards the end of the book when they discover their true feelings about each other? As soon as that question occurred to me (in that form), I decided that, while there would be a hint of an incipient relationship, that would be as far as it went; they would be utterly professional (because, when it comes right down to it, they both are). Eventually, although the writing process had been slow to start, it gathered momentum and ended up as a book that I was pleased with. Well, mostly… I eventually had second thoughts about the final, brief sequence, but that was not until much later.

It was never available in the UK in print – by then, I had parted company with my British publisher, not entirely amicably. Piccolo was published by Walker Books in the USA and by Thomas Allen and Son in Canada in 1992. Like its predecessors, it sold reasonably well without setting the heather on fire – but it was the last to be published in print. Walker Books had made the decision to scale back on fiction, so that avenue was now cut off. Other matters intruded; I still had a full time teaching career and I was moving up the promotion ladder, which was taking up more and more of my ‘free’ time. Although I wrote two more books in the following years (which were not published), in reality, my writing career came grinding to a halt.

So to the ebooks… What I did was to update Piccolo – the main thrust of the book could apply just as well to 2012 as the early 90s, so I introduced references to mobile phones, memory sticks, SD cards, etc, none of which made any significant impact on the story itself. What I did change, however, was the final sequence. In the print version, I was encouraged to identify the mysterious Beresford, on the basis that, if I were not going to write a sequel, I might as well reveal his identity, but I later thought that the revelation detracted from the main point of the segment, which was to point out just how high the conspiracy went. Plus, the ‘reveal’ didn’t really add up, either… So, in the ebook, I’ve restored the mystery, partly because, now, I am thinking about a sequel and I don’t intend Beresford to be who he’s supposed to be in the original book.

So what is the significance of the title? Why Piccolo? I can’t really tell you, not without giving too much away, but it was inspired by a World War II device called ‘Oboe’. Look it up if you like – or read the book…