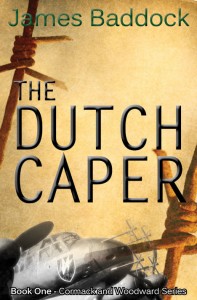 Although The Radar Job was my second published book, it was, in fact, the fourth book I had completed. Strictly speaking, my second and third books were called The Cromwell Exercise and Phoenix, but neither of them had really ‘gelled’ by the time I came to start on Radar. I had the idea from a book that my parents gave me for Christmas called The Secret War, by Brian Johnson, which described the undercover war that took place in Europe during 1939-45; it was linked to a BBC documentary series of the same name. One of the episodes stuck in my memory, describing how, in May 1943, a German Ju88 night fighter landed at Dyce airfield, just outside Aberdeen, carrying a fully operational set of the Liechtenstein airborne radar that had enabled German night fighters to shoot down a crippling number of RAF bombers. The official story was that the aircrew had defected to the UK, but what struck me was that, just at the moment when the RAF would have given their eye teeth for any information about the radar, one fully operational set was delivered into their laps. Add to that the fact that the aircraft appeared to be expected – one report said that it was escorted by six Spitfires – and I began to wonder whether it was more than simple coincidence. The subsequent fate of the defectors also seemed to be shrouded in mystery – and wasn’t May 1943 a little early for defectors? (Indeed, the level of defection by Luftwaffe pilots was almost non-existent, even during the last months of the War, let alone two years earlier.) So… what if the plane had been stolen?

Enter The Radar Job… It was possibly the easiest book I have ever written, in that the story almost wrote itself. Faust had taken over seven years from first putting pen to paper to final manuscript, Cromwell almost as long and Phoenix was five years in the making (and they still weren’t finished, anyway); Radar took just over twelve months to be ready for publishing. A good deal of the reason for this was that I had learned from the mistakes of the previous efforts, in particular in terms of setting up the characters at an early stage of the writing process, so that, as much as possible, their actions would be consistent and plausible rather than dictated by plot demands. Thus, Alan Cormack and Tony Woodward came into being, an example of the ‘odd couple’, two very different characters from diverse backgrounds thrown together and having to make the best of it. Thus, there was Cormack, cynical, disillusioned, insubordinate, coming from an East End background, and Woodward, son of an hereditary knight, product of a public school, heir to a large country estate, a top RAF pilot, naïve in terms of undercover operations, and with a deeply ingrained sense of duty and patriotism. They dislike each other on sight – but by the end of the book, each one has saved the other’s life and they have become an effective team.

The point was that I was able to provide a kind of mirror to these two in the two main German characters, Behrens and Kreissner. Behrens is a former fighter pilot ace, decorated with the Knight’s Cross, but now barred from flying duties by his wounds; he has offended a Luftwaffe general in Berlin by his willingness to speak the truth and has been sent to a dead end job in Holland for his sins (in other words, someone with a good deal in common with Cormack). Kreissner is the senior Gestapo officer in Leiden, efficient enough in routine matters, but basically unimaginative and chiefly concerned with furthering his own career. These are the two that Cormack and Woodward are up against – equally disparate backgrounds and personalities, but, potentially, a useful team if Kreissner’s experience can be allied to Behrens’s energy and resourcefulness. However, Kreissner’s refusal to countenance any co-operation means that any teamwork is not an option – in contrast to the way that the Cormack and Woodward combination developed.

One thing I wanted to deal with was the sense of loss and waste inherent in war; by the end, Cormack is wondering whether stealing the radar is truly worth the deaths of most of those helping him. Indeed, he himself has to pay a very high price at the end. I suppose I was trying to put across my own thoughts about War here.

Radar was duly published, and was then picked up by Walker Books for publication distribution in the USA and Canada, although renamed The Dutch Caper. To be honest, I prefer the Caper title, although I always think of the book as Radar. The original title almost came about by default; while I was trying to think up a title, my agent and I always referred to it as ‘The Radar Job’, firstly as a reference to it in terms of a work in progress, then, later, as an acknowledgment that ‘job’ was also slang for ‘theft’. We never did come up with a better title (or, at least one that we could agree on), so The Radar Job it was. Changing the title to The Dutch Caper was, obviously, aimed at an American market.

When it came to re-editing the book for ebook conversion, I was pleased to find that there wasn’t really much to do to it – partly because that meant less work for me, but also because the book had held up pretty well over the years (one advantage of writing WWII stories is that they’re not going to become outdated in terms of the events described – a modern thriller always runs the risk of being overtaken by what happens in the real world). All Radar needed was the correction of a few typos, some more lines of dialogue here and there, a general polishing up and it was good to go.

As I’ve said, I was pleased with Radar, right from the start. So much so that I immediately started on a sequel, Emerald, involving Cormack and Woodward, and there has since been a third in the series, Berlin Endgame. I’m working on a sequel to Endgame, and I’m toying with the idea of using Behrens again in yet another book (a meeting between him and Cormack would be interesting, to say the least…), so I’ve a lot to thank Radar for, one way or another.