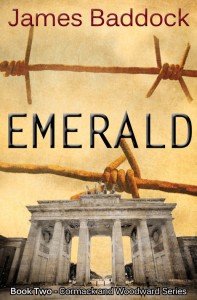 Emerald was written as the sequel to The Dutch Caper, and used the same two main characters (Cormack and Woodward), this time sent into Berlin in the dying days of the War to rescue ‘Emerald’, the codename for a highly placed SIS source in Berlin who is passing on information from with Hitler’s Bunker. The agent actually did exist and she was, very probably, the mistress of General Fegelein, one of Hitler’s personal staff. What her eventual fate was is unknown, but it was the starting point for Emerald. As with Caper, I started working on the characters at an early stage.

I already had Cormack and Woodward (although Woodward needed to be portrayed as a little more cynical than in Caper as a result of his experiences in Holland two years earlier; he is far less of a junior partner this time). In real life, Fegelein’s mistress came of Irish descent, according to witnesses, and was supposedly married to a Hungarian diplomat whose whereabouts in 1945 were unknown; all those who had met her agreed she was remarkably attractive. Thus, my woman agent had to have a similar back story; enter Marianne Kovacs, nee Driscoll, now desperate to escape from Berlin before the advancing Red Army moves in, but realising that Fegelein is not going to be any use to her at all. Her only chance is for someone to get her out – someone from the SIS. But she needs a lever, so she acquires a number of files concerning the ODESSA’s escape routes and tells London that if they want them, they will have to come and get her.

So that dealt with the three main characters, but I needed a ‘bad guy’ to pursue them – and he needed to be a genuine threat to them, so he had to be capable and resourceful. That ruled out a mindless Nazi thug, obeying orders unquestioningly, but it then raised the question of why the bad guy would pursue them when he would be intelligent enough to realise that capturing them would obviously make no difference to Germany’s fate. No problem – blackmail. His wife would be taken prisoner by the Soviets and so he would be forced to work for them, come what may, because he is devoted to her. Thus, with relatively little effort, Rindt came into being, a Colonel in the Gestapo, but who has risen to his senior rank through merit, pure and simple, and who is, basically, a decent man driven to destruction by his love for his wife.

Actually, it wasn’t quite that simple – I had to find a plausible way of having Rindt pursue the fugitives from Berlin to Rostock, on the Baltic Coast, but how would he (or his new masters) know they would be heading there? Enter Kim Philby… Problem solved.

What I then had was a story of betrayal on both sides, with Cormack and Woodward not knowing who to trust and Rindt being forced to work for the Russians. From then on, like Caper, the story fell into place pretty easily, with the finale worked out on paper long before I actually reached that stage in the manuscript. What I liked about it was that the reader feels a good deal of sympathy for Rindt and his predicament; as with Behrens in Caper, you have the feeling that Rindt and Cormack would have got on very well together under different circumstances. As it is, each one is finally left with no alternative but to try and kill the other one.

When the book was published, I found, to my annoyance, that the Author’s Note that was supposed to go at the end of the book had, in fact, been moved to the beginning – and it gave away far too much of the story, as far as I was concerned. That’s been corrected in the ebook version. Like its predecessors, it gained positive reviews in the States (there was even talk of the film rights being bought up at one point, but it never happened).

However, I had ‘run out of war’, in terms of any sequel; any subsequent Cormack and Woodward story would have to take place post-war, but I already had the outlines for an idea that would eventually become Berlin Endgame. That would have to wait, though – by the time I was in the closing stages of writing Emerald, I was in the planning phase of my first present day thriller, The Alaska Project.